Two-way radios play a key role in driving the efficiency of day-to-day operations at MDJ Light Bros specialist waste management and processing facility. All vehicles in the yard have radio fitted and the system, which covers the whole of the quarry site, also uses portable radios.

MJD Light Bros has provided specialist waste recycling and waste management services to businesses throughout the UK and Europe for over 40 years. With a wealth of knowledge gained in the metal recycling industry, it has pioneered ground-breaking treatments for resources such as Waste Electrical and Electronic Equipment (WEEE) and steel.

For MDJ Light Bros the ‘one to many’ nature of two-way radios is a negative rather than a positive as it facilitates general group chat on the radio system, which they found to be distracting, and offers no privacy.

Press2Talk therefore supplied MDJ with high tier Hytera MD785 mobiles for their vehicles and Hytera PD785 portables for other radio users, which provided two relevant benefits for an incremental increase in price:

Firstly, both radios offer pseudo trunking, which means that they can operate on a one-to-one basis. To make a call the radio user selects the person, crane or shunter vehicle they want to speak to from a list on the radio in exactly the same way as on a mobile phone. Most users are in regular communication with the two weighbridges at the site, so these have been allocated hot keys, to speed communication and ensure that the constant flow of traffic in and out of the waste processing plant is kept moving.

Secondly, both radios also offer improved utilisation of the frequency spectrum. Time-division multiple access (TDMA) makes it possible to assign the available bandwidth with double channel capacity and cut down on licences required and therefore expenditure.

Since Press2Talk supplied the radios, Hytera has issued several software updates with relevant benefits for MDJ. For example, originally if MDJ replaced an employee then their radio and all the others on the system had to be reprogrammed with the new user’s name. A software update improved this so that only the relevant radio need be updated, and the others update automatically when that radio is used.

The radios which Press2Talk supplied have been ideal for our requirements. Press2Talk keep the system updated and are always at the end of the phone if there’s an issue, which is really important to us as we rely on the radios to keep the business moving 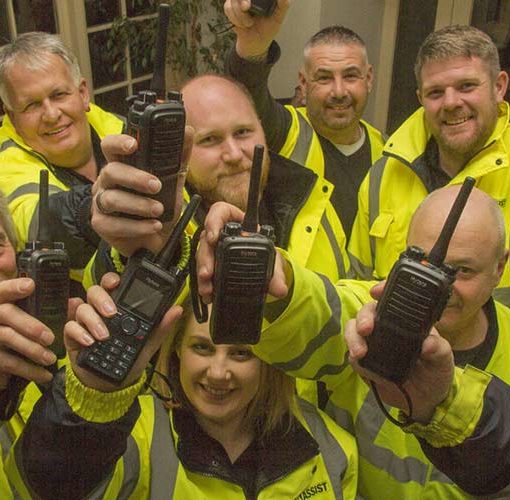 A System for Heroes Press2Talk supplied a system based on Hytera radios to provide clear, reliable communication for the team at 4×4 Assist. […]